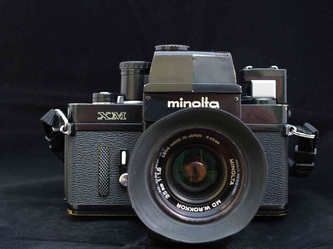 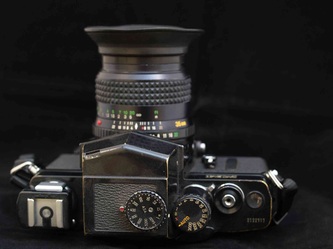 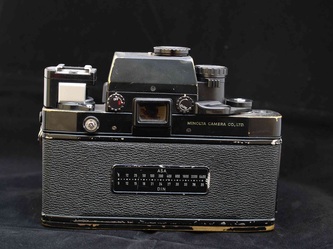 Introduced on 1972´s Photokina the XM went on sale in 1973. This was Minolta´s first attempt to break into the professional SLR market which was dominated by Nikon in those days. This is quite some camera. A heavy (and heavy it is) duty working horse. Even today it´s very usable. With full manual exposure control or aperture priority automatic exposure.

Funny enough it does have interchangeable finders but no possibility to attach a motordrive. it was not until the introduction of the XM motor in 1976 that one could buy a motordriven XM. But still one had to choose: XM without motor or XM motor with motor. The motordrive wasn´t detachable

Though my sample is quite used (isn´t she beautiful?), it still works properly. The ´senseswitch´ on the front, which starts the lightmeter, isn´t very reliable. But you can also start the lightmeter with the knob left of the viewfinder. This works fine. I used to take the XM to places were I expected more or less rough photography. I bought it allready with a very worn appearance, but I didn´t spare it when I used it myself. No problemo at all.

The XM was, en is, a very good and solid camera. However this wasn´t enough to beat Nikon (and later Canon). One can only guess for the reason: was it the lack of a motordrive, didn´t the pro´s want to change brands because they allready bought into a fortune of Nikon lenses or was the XM just not that much better than Nikon that it was worthwhile to change brands? I don´t know, but Minolta didn´t succeed in entering the promarket. In fact they never succeeded in entering the promarket. Also the later promodels ´9000´, ´9xi´ and ´dynax 9´ all failed.