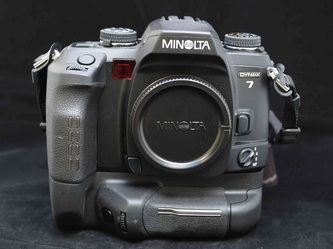 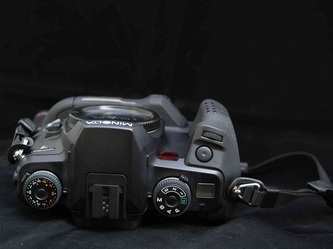 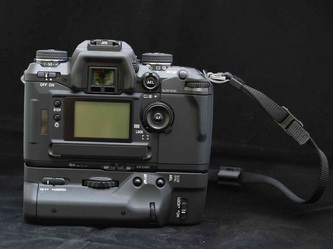 Finally, without any hesitation I can say Minolta found the right path again. It took them 15 years, from the 1985 Minolta 7000 to this Dynax 7 of the year 2000, to make one hell of an advanced amateur camera again. One of the best things is, they continued the good ergonomics of the 600si. Large and solid knobs with clear functions. No extra function cards, but everything you need on board. This '7' has some very good features added, like easy manual override of AF (with a knob on the rear side), large and clear LCD on the back (with light), diopter correction and much, much more. A fantastic camera. The manual override of AF is less obvious for Minolta than let's say for Canon. From the beginning Minolta built the AF motor in their bodies. Which meant the lens had to be driven by a screw in the lensmount. To make manual override possible, the lensmount screw had to be unleashed. This is exactly what the rear AF/MF knob does. Canon chose from the beginning for a piezo electronic motor inside their lenses, which made it much easier later on to implement fulltime manual override. Later Minolta introduced lenses with a built in piezo electronic motor also, the so called SSM lenses. In fact the Dynax 7 is the only body that can focus such lenses standard. The top level model Dynax 9 only focusses such lenses after a hardware upgrade was implemented. This means in practice that most 9's don't focus SSM lenses (something to be aware of).
The Dynax 7 is an absolute no brainer. It would make a perfect analogue backup next to a digital Minolta or Sony. Also throw in the vertical grip VC-7. It gives extra grip and a vertical release button. It also takes AA batteries, and even let's you choose between the batteries of the camera (CR123A) and those of the grip (AA or CR123A). If you find a nice specimen, don't hesitate and go for it!