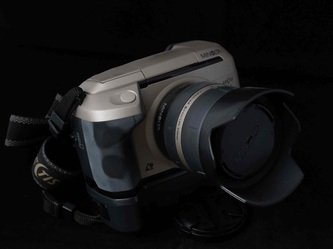 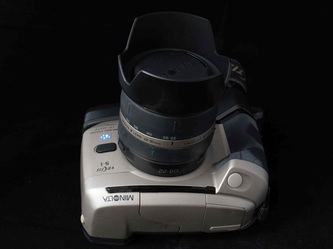 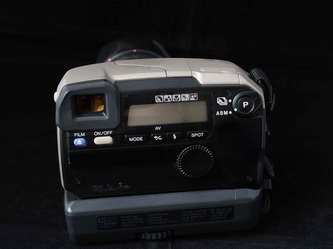 Funny enough Minolta, Nikon and Canon all made two SLR bodies for APS fim. Minolta made the APS topmodel S1 and the simpler version S100. Though the S1 is a rather solid body, I think Canon's IX and Nikon's Pronea 600i are both more solid, easier to use and even better looking. So what is there left to say about the S1? Well it's not too big and heavy and It's well built. It's even splash-proof. Would I use it in the pooring rain? Certainely not! In every way it's an amateur camera and I don't really trust the 'splash-proof' claim. On its best the S1 could be used as a mouldable point-and-shoot.
With the APS SLR Minolta managed to pull up the same trick as with the change from manual focus to AF. With APS they introduced a new bayonet. Again! So existing Minolta users couldn't use their MD lenses nor their AF lenses.
Minolta introduced this camera in 1996 with a rather high price tag of almost 500 euros. Way too high in my opinion for such a plastic wonder. It came in a blackish and titanium finish. Alongside the S1, Minolta introduced a new lens lineup. Mostly uninteresting and slow lenses. However there were three remarkable lenses. A 50 mm macro, a 400 mm mirrorlens and a supersolid 17 mm which was introduced alongside the digital RD3000. Especially the 400 mm is a peculiar lens. With it's fixed f 8.0 diaphragm it needs a lot of light, asking for fast films. But to my knowledge there were never fast APS fims (at least not over 400 ASA). This lens can only be used on a tripod with long shutterspeeds. But for what then? Due to the necessary long shutterspeeds not for wildlife or action.
So is the S1 of any practical use today? The clear answer is NO. There's hardly any APS film available. The camera is nothing special: there are way better options available for the same money. And if you buy any lenses: they can only be used on the obsolete bodies S1 and S100. There's no second life possible on todays mirrorless cameras. The only reason you'd want to buy into Minolta APS is to collect this system and put it on display. Nothing wrong with that of course (I did so anyway).