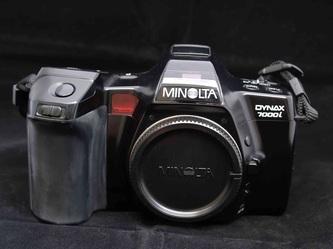 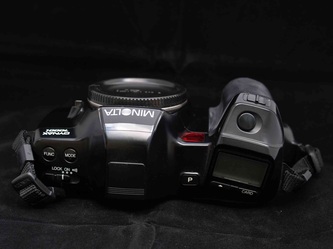 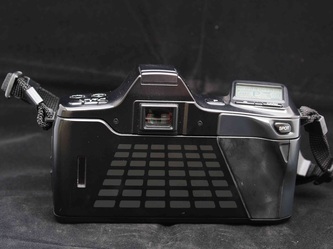 Then there was the Minolta Dynax 7000i in 1988. As always with technical innovations. It's the first generation that shows the way, but it's the second generation that perfects it. The 7000i has an autofocus system that's way better than that of the 7000. The 7000i uses 3 autofocus sensors, one horizontal in the middle and two vertical besides the centre sensor. This makes the AF more reliable. But also AF is a lot faster than that of the 7000, which makes the 'i' more usable.
Besides the better AF, Minolta introduced a few 'innovations' which are rather doubtful in my honest opinion. First of all they introduced the so called 'artists entrance'. With the introduction of separate chipcards one could alter the custom settings of the camera (which is still quite useful), or one could set the camera to all kinds of standard settings like 'portrait' or 'landscape'. Settings which every SLR of today offers standard. But in those days Minolta had the nerve to charge her customers extra for these bogus settings. All on top of a camera that was allready rather expensive. After all it was Minolta's camera for the advanced amateur, so they charged a serious price for it. Later Canon delivered all those settings standard in their bodys. No extra chipcards needed that could be lost easily.
There was another aspect where Minolta thought they had to improve something that wasn't wrong in the first place. They introduced a custom Minolta flashshoe. So as of from the 7000i no standard flash could be mounted to Minolta's anymore. This folly lasted until today's Sony A99, with which Sony, after 24 years, abandoned the custom hotshoe in favour of the standard hotshoe every other brand uses. Yet another example of Minolta marketing, where they tried to solve non-existing problems. A strategy they were to push further with the later 7xi, and which prooved to be wrong. More and more customers turned their backs on Minolta.
Though critical this report may seem, the 7000i is a very usable camera. Especially today where bodys are extremely cheap. Also the extra chipcards are almost for free, so you can buy into this system cheap. AF and exposure are very good, so with film you're settled with this camera!