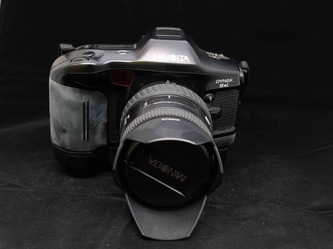 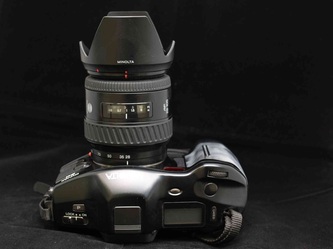 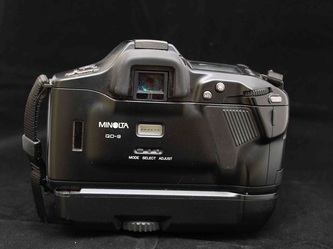 If you have read my thoughts on the 7xi, you might think I would write off the 9xi also. But no, on the contrary! The 9xi is one hell of a camera. Having skipped a pro-model in the x000i series, it was time to replace the Minolta 9000 in 1992. The 9xi is a serious pro-model. A hefty durable piece of machinery. Fast autofocus, fast motordrive with 4,5 fps, reliable exposure metering all in a heavy and solid camerahouse. Yet still with the stupid side door for chipcards.  Though you really need just a few cards. The custom settings card is essential to set the camera to your needs and the multispot metering card adds a nice feature.
Absolutely extraordinary are the shutterspeeds the 9xi is capable of: 1/12000 th of a second for shortest shutterspeed and 1/300 th of a second for shortest flash synchronisation. A record only equalled by the later Dynax 9.
Still usability of the 9xi isn't very good and resembles that of the 7xi a lot. For example 'eyestart' can't be switched off and changes in settings still require buttonpushes and wheelturns or fumbling around with mickey-mouse-buttons in the side door. Where these annoyances aren't compensated with anything in the 7xi, the 9xi compensates for these shortcomings with a high responsiveness, fast and accurate focussing and a very solid build. Besides that the 9xi does have a dedicated depth-of-field button and offers exposure bracketing, flash bracketing and multiple exposures standard. A huge improvement over the 7xi.
It's a pity the additional batterygrip (see the photos above) doesn't come with a vertical releasebutton. A peculiar omission because earlier motordrives of Minolta offered this possibility. Like the motordrive 1 for the X-700, or the motordrive of the 9000.
Like the XM, the 9000 and the later 9, this 9xi never managed to break the hegemony of Canon and Nikon. It didn't offer anything Canons and Nikons couldn't do also, though it is no worse too.
Then I save the best for last. Today the 9xi is an absolute steal to buy secondhand. In fact I own two. One of them I bought for 90 euros, 28-105 mm lens included. An absolute giveaway for a body which cost about 1.200 euros new!