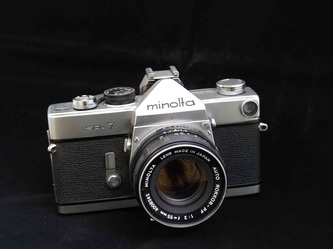 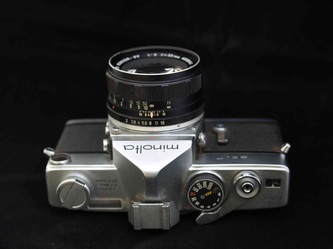 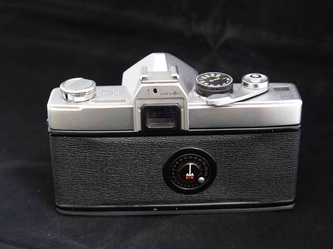 This is the oldest camera in my collection. It's an SR-7 of the later make which started 1965. The later Model V wasn't very different of earlier series and distinguished itself by the fact that the stepped shoulders on the camera body were removed.

This camera is equipped with the Rokkor 1:2 55 mm. In those days 55 mm or 58 mm was the standard 'kitlens'. In later years the 50 mm became the standard lens.

It was the first SLR with a built-in CdS light meter. Of course this wasn't a through-the-lens (TTL) type. The lightmeter had its own place at the top-rigtht side of te body. You can clearly see it on the first photo.

Actually I have no practical experience with this camera. I bought this camera to complete my collection, because of the '7-number'. For practical use it's a bit old. Though the light meter works, I doubt the accuracy of it. After so many years the shutter might be less accurate too, but to they ear the speeds still sound pretty good, after almost 50 years...