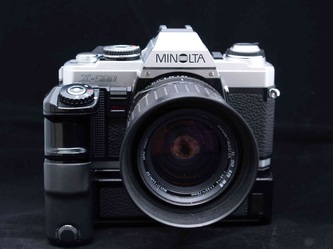 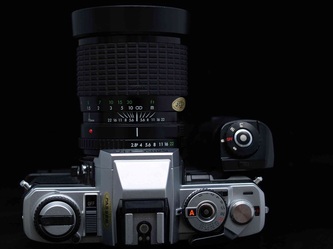 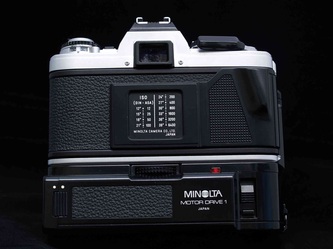 As always Minolta introduced a simpler '5-line' besides their advanced '7-line' in 1983. However in this case one can doubt if the X-500 is really a simpler model. True it does without the programmed exposure of the X-700. But without the later common program shift wheel, the X-700 in P mode is no more than a point-and-shoot. You have no influence on the shutter-aperture combination, typical for this first generation program camera. Engaged photographers will shoot in A mode or manual.
That's exactly what the X-500 offers, but it adds some real goodies the X-700 can't do. First was the introduction of a display of the selected shutter speed in the viewfinder when shooting in manual mode. Unlike previous bodies such as the XD series, the X-700 did not have a display of the actual manually set shutter speed in the viewfinder, meaning that photographers had to move their eye from the viewfinder to confirm the set speed.
The second change made was a matter of electronics. The X-700 is designed so that when a dedicated flash is attached, the camera will only fire at the sync speed of 1/60th of a second. However, sometimes photographers like additional natural light in a scene to enable a more natural image. The X-500 enables a photographer to set a shutter speed slower than the sync speed through the use of the AE lock button.
Third change concerns the fact that the X-500 records the correct light meter reading even when using depth of field preview. Unlike the X-700, when the depth of field preview button is activated, the camera automatically disengages the aperture simulator, so the camera disregards the setting on the aperture ring, and simply meters through the lens. This means that the correct shutter speed is shown even when stopped down.
Last, the X-500 displays an 'A' for aperture priority when a PX series flash is connected and switched to TTL mode. When the flash is switched to manual, this symbol is not displayed. Accordingly, a user can tell simply looking through the viewfinder that the flash is TTL compatible and set to that function.
All in all some minor, but very relevant changes to the X-700. Which makes the X-500 a secret tip. As with most manual cameras they're a steal to buy today. Practical use, in my opinion, is better than the X-700. Go for it!